A review of the Early Access Flight Sim World, by Dovetail Games

Rumours of a new Flight Simulator from Dovetail Games has been circulating now for a while and they finally came good, releasing the early access version of Flight Sim World on 18th May 2017.  Having been caught up with other things for the last few days, I only found my first opportunity to take to the skies today and see if FSW manages to match the hype around it.

First Impressions
Once the software had completed it’s first load/setup, I was pleased by the improvements to the home screen GUI over that of Flight Simulator X.  The various menu screens are well laid out and are easy to navigate.  Something new that FSW has is a ‘Pilot Profile’.  At first glance, this would seem to be an improvement over the flight log recording of FSX, one aspect that was always a little hit-and-miss.  FSW appears to have some structure to it, with 2 different ‘licences’ available to train towards at present.

In addition to the above training, there are missions and the all important ‘Free Flight’ modes, which will be familiar to FSX pilots.  Oh, and Dovetail have thrown in some 61 achievements to try for as well if that’s something that has an appeal for you.

First Flight
I took a few seconds to consider where I’d like to start off in FSW, and quickly decided to head straight into a free flight.  At this stage, there aren’t too many aircraft to choose from, but I understand that’s because the software is in it’s early access stage and that a wider variety will become available in time.  Otherwise though, the initial flight planning seems simple and for the maiden voyage, I opted to fly out from London City (EGLC) to land at Southend International (EGMC), a route that will take me along the River Thames and past the Queen Victoria Bridge.

Loading times for flights seem a little slower than that of other flight sims. Long enough, in fact, for me to have just about written the above paragraph before the aircraft was ready on the runway.

If you’re familiar with Flight Simulator X, then you’ll not find too much difference when it comes to getting airborne in FSW.  Controls seem largely the same (although after just  a couple of flights, it’s entirely possible I’ll still find some that are different).

And here’s where I found the first real negative.  The framerate in FSW really isn’t too good.  It isn’t completely horrendous for me, but bad enough to make landing more of a challenge than it should be.  The rig I’m running is mid-range, all purpose and old enough to be in need of an upgrade, so at first I considered that this may be part of the problem.

However, on taking a look at some of the reviews and comments posted on Steam, I discovered that others are having similar problems, in some cases badly enough to make FSW unplayable.  Additionally, there doesn’t seem to be a correlation between how comprehensive the computer systems are and how bad the fps is.  In some cases, users with high end machines are experiencing worse FPS than I have done.

On the whole, I think FSW has quite a bit of potential as Dovetail continue to develop it.  It does have more of a ‘game’ feel than that of a simulator, and it really does feel like an ‘Early Access’ piece of software, just as it claims to be, but I do rather like the look and feel of the whole thing, even at this early stage.

Graphics on both aircraft and terrain are better than that of FSX, but that does seem to be causing a variable hit on framerates, depending on what you’re running, but I’m hopeful that Dovetail will get to the bottom of this and rectify it in due course. 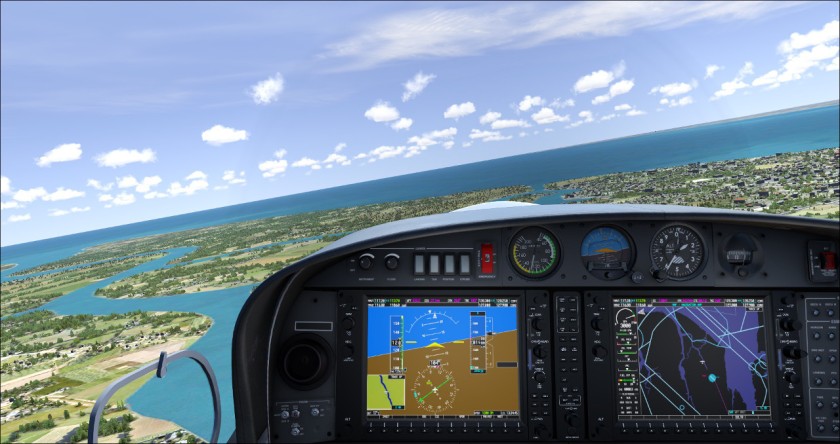 As to whether you should purchase FSW in it’s current rendition.  If you’re looking for a nice polished game/simulator with no bugs, then I’d strongly suggest leaving it for the time being to see how it goes.  Dovetail have announced the release of a patch for it later this week, so that might iron out and improve some things already.

On the other hand, if (like me) you’re curious enough to want to follow the software through it’s journey to shiny polished, then the price tag isn’t too much of a hit to take.  If Dovetail do manage to fix the FPS issues, then I can see myself having a few happy hours here and there, finding my way around it.

I won’t, however, be ditching FSX anytime soon.